Frame construction is planned to be made of aluminium profiles, each parts riveted together. Shell – lifting gas container is 800g sounding balloon. 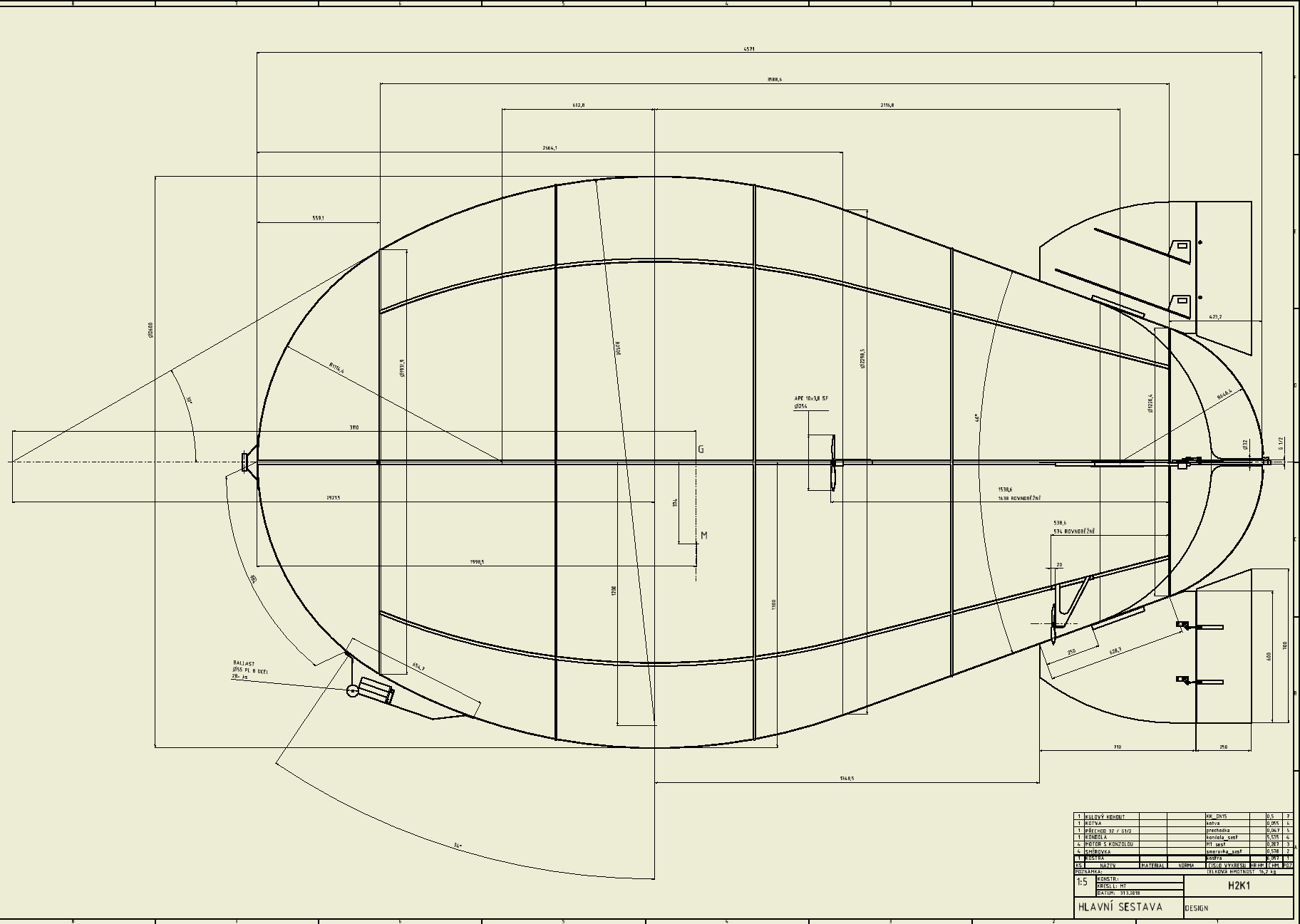 Calculation is based on Laplace equation for thin membrane 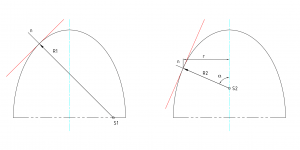 is given and second main radius

can be written as

can be solved  angle of tangential tension 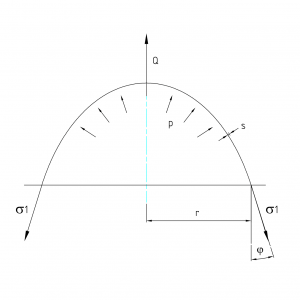 where axial force on shell section is

after modifying can be written axial tension

substitution back to Laplace eq. will give second tangent tension 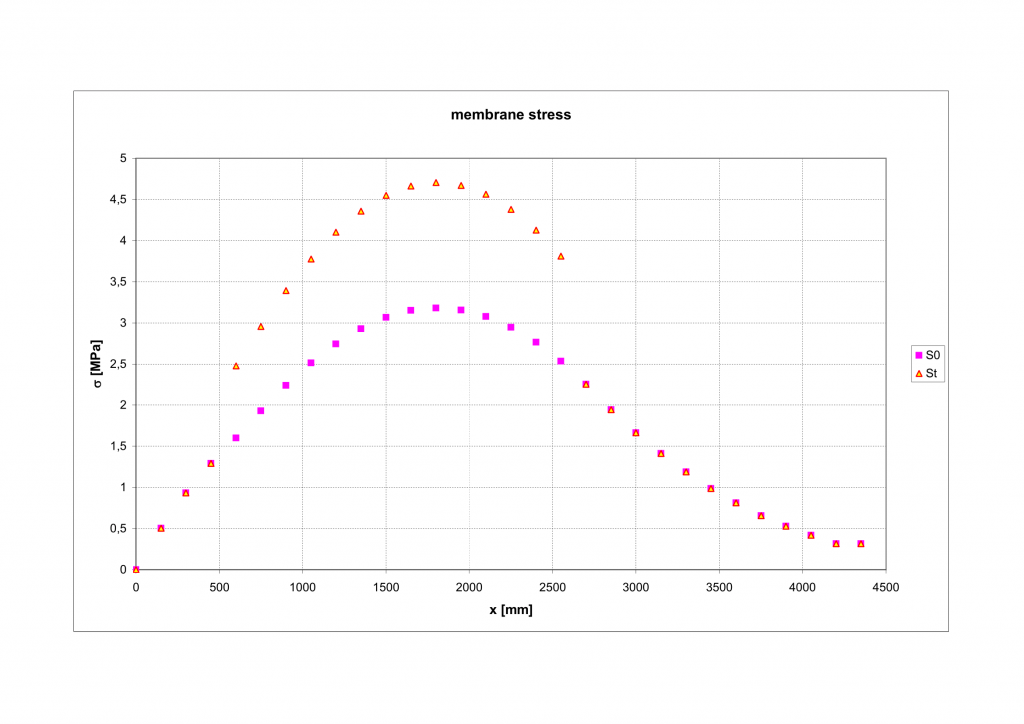 Graphs computed for inflation of sphere , variables are functions of relative membrane deformation 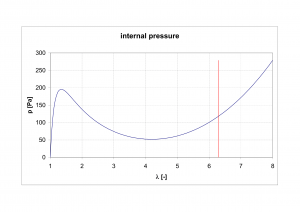 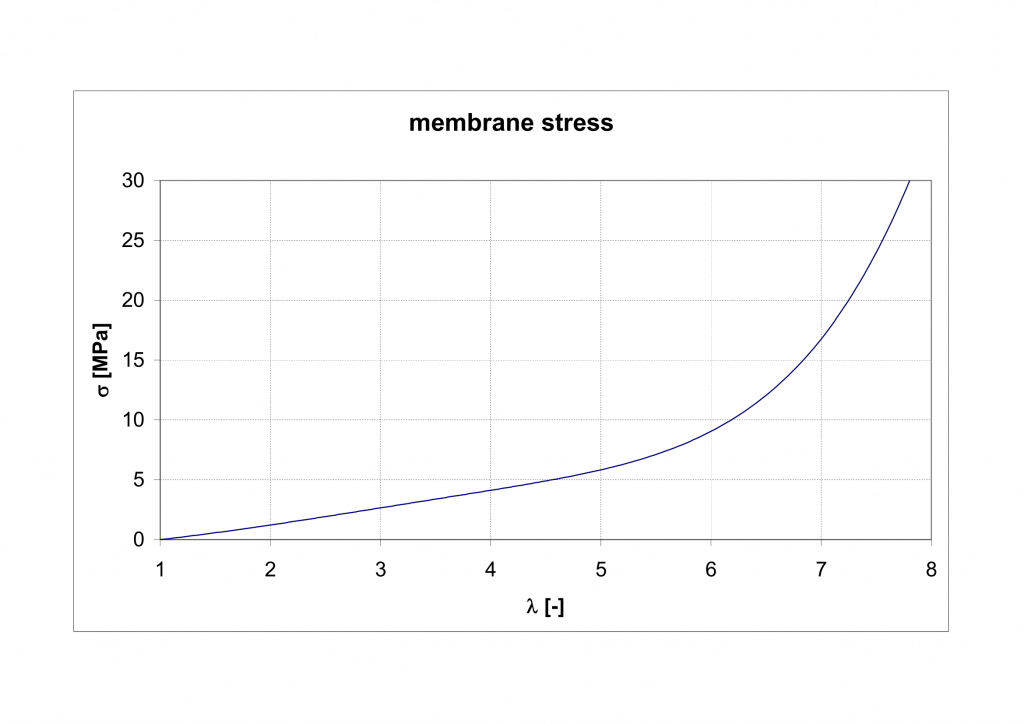 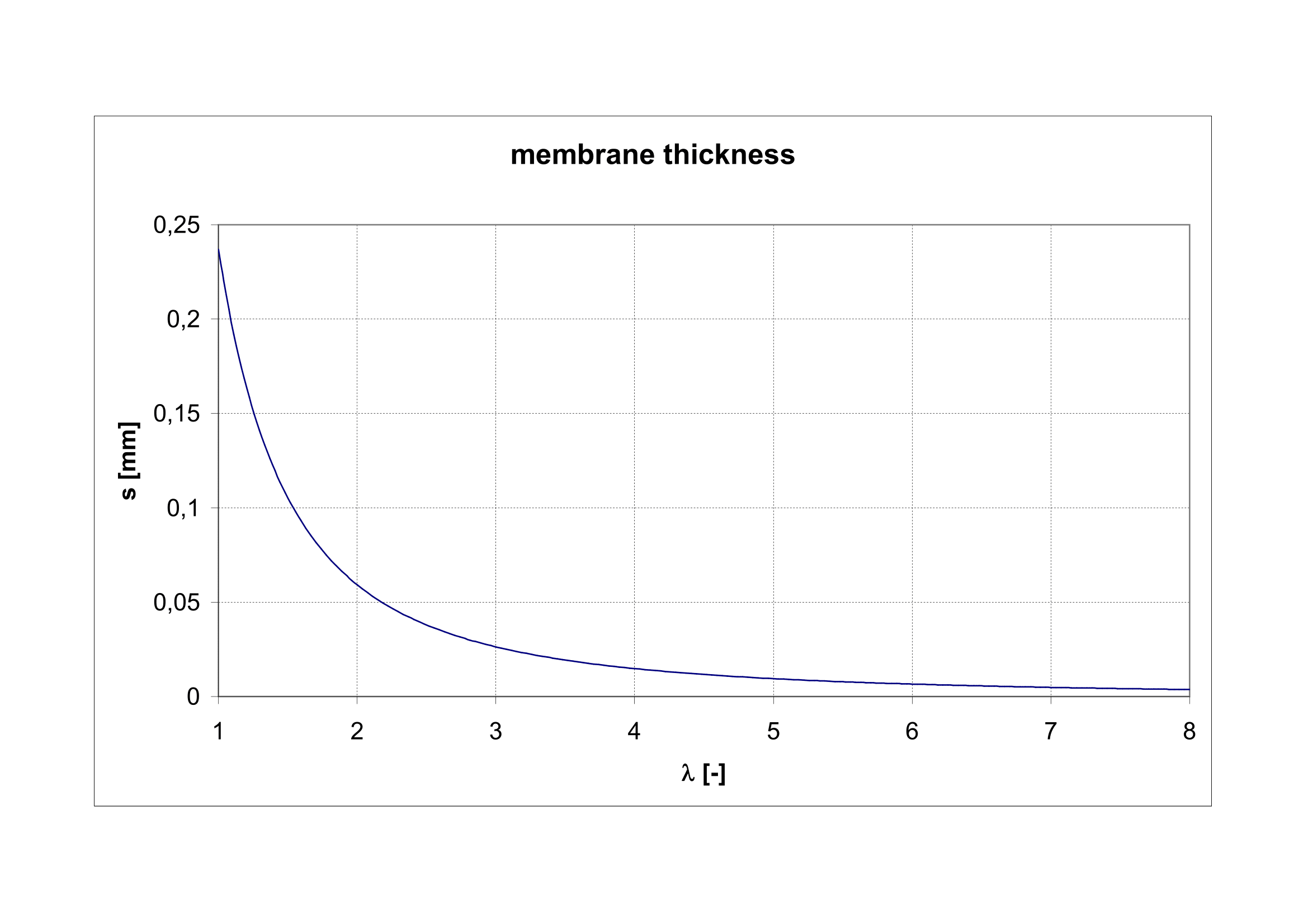 Function of membrane stress and thickness is based on Yeoh model computed by http://www.lajss.org/index.php/LAJSS/article/view/2622

On the basis of experimental test data of sounding balloon manufacturer –  https://novalynx.com/store/pc/400-8200-Series-Weather-Balloons-p882.htm , can be determined, that membrane burst with stress load

. Computed maximal stress of shell is

NTP – normal  temperature and pressure defined as 20oC and 1 atm

For designed total weight of airship

. To obtain vertical force stability, it is needed to adjust  up to weight equal to gross lift by the ballast. Ballast is situated in front section of gondola. Weight of ballast  will be adjusted in dependency of real airship weight and weather condition (atmospheric pressure and ambient temperature). To adjust position of center of gravity towards to the same vertical line with buoyancy center, which is indispensable for horizontal flight stability, gondola is movable mounted on bottom beam, so the position of COG can be changed with position of gondola.

analysis has been solved for travel speed

which gives for defined geometry 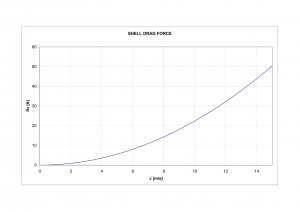 With computed characteristic of dependency shell drag force and travel speed, could be determined the motors thrust force which must be 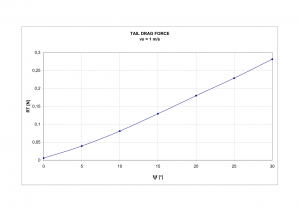 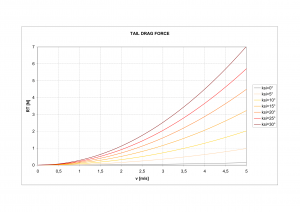 Applying the same formula for drag coefficient, it is computed the exponential characteristic for several rudder angles increasing with square of velocity.

In horizontal direct flight, center of buoyancy and center of gravity must lie on the same vertical line. This condition is achieved with ballast position adjustment during pre-flight preparation.

On figure, airship drawn in inclined flight, acting forces are shown below. 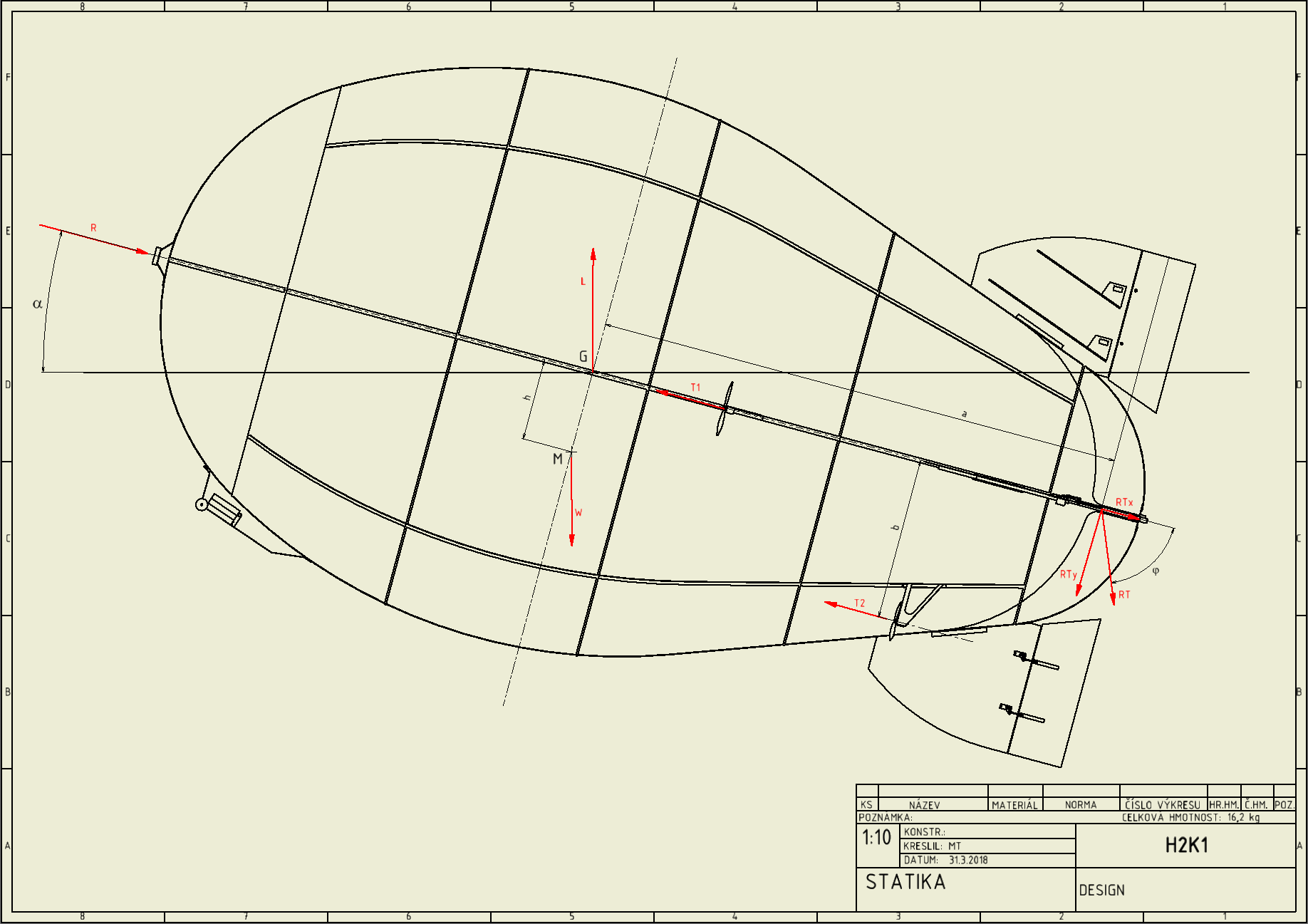 For condition of static equilibrium, can be written for moment about G

During the horizontal flight, most thrust power will be generated with

will be used as compensator or in cooperation with rudder for increasing a total thrust. For inclined flight (particularly during the start), most thrust will be supplied by

engines to have additional positive moment about COG. This should leads the airship to elevate a nose.

In case of airship ascent or descent, direction of motion is not symmetrical with hull centre line, but it seize an angle between these two lines. This effect causes asymmetrical  pressure distribution over the shell and creates additional dynamic force. For an example of nose elevated airship moving forward, due the increased pressure below the hull, center of pressure over the shell lies down the hull center line and causes force acting in positive direction of rotation, adding the positive moment about COG, so this force trends to elevating the nose up. This force, called dynamic lift of hull, is hard to determined numerically because the direction of motion angle is not easily predictable in decency of hull center line angle. In airship design is described with empirical formula based on real model measurements. For this design purpose, this force is omitted and it is assumed that hull centerline angle and direction of motion is the same. Therefore pressure distribution is symmetrical over the shell and resultant drag force lies directly on center line.

From fluid dynamic analysis can be determined shell drag force

, value can be expressed from static equilibrium as

which is solved for given inputs .

Pitching and yawing rudders have got the same geometry. Kinematic of control mechanism is designed to have the same maximal angle to positive as well to negative rudder deviation. Therefore the controlling has got symmetrical behaviour to both direction. For each rudder, two of parallel acting servo drives is designed so each servo balances a half of force on rudder surface. 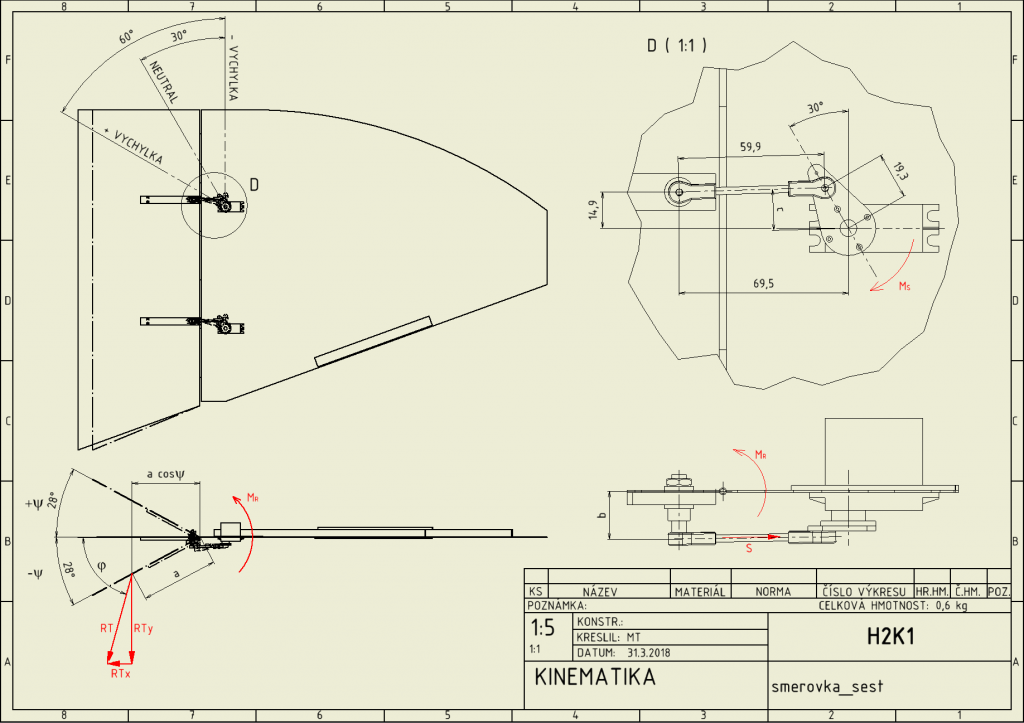 From this equation, force on control rod

can be expressed and with substitution to equation for moment about servo axis, moment on servo shaft can be written as

From fluid dynamic analysis can be determined tail drag force

is for each maximal deviation

For given inputs, moment on servo shaft is

.Based on this calculations, the servo drives are able to operate with fully deviated rudders up to travel speed

Propeller type had been chosen on basic of required parameters. Calculation of propeller’s static thrust had been done with program at website: https://rcplanes.online/calc_thrust.htm

Assumed for horizontal flight with full thrust of

Airship is designed for safety operation up to nominal travel speed

. Anyway based on calculations, it is assumed that airship maximal speed should reach approx.

and with total weight

for free lift, which should be enough for omitted parts weights (RC accessories, rivets, electronics,…)

Most of useful information about airship aerodynamic had been drawn in publication of US WAR DEPARTMENT technical manual of 1941, which can be found at the link https://www.faa.gov/regulations_policies/handbooks_manuals/aviation/media/airship_aerodynamics.pdf.

With next step, working drawing will be processed in detail, and realization will continue.